While modiji fights his war against black money, here I am fighting this silent war against ...black cockroaches!
No pest control, no boric acid surreptitiously mixed in ghee laced ata, no spray ever ' hit's them..they seem absolutely immune!
They appeared suddenly one fine night and truly obedient to God's word have " gone forth and multiplied".
We tried thrashing them with our chappals..thappp..thappp..goes our chorus  at eleven each night, when we suddenly switch on the kitchen light.
Some were beaten to pulp..others learned a new trick..hide themselves immediately in narrow trenches against the wall like soldiers..so that nothing gets to them.
They dip themselves into the oil( they believe in naturopathy), dive shamelessly into any food  in vessels kept even a millimeter wide open..They come dangerously near my cutting tray as I chop veggies. They aren't even afraid of me!
I began scrubbing the kitchen platform clean with soap, ripping the crevices free from trapped food particles, cementing open cracks in the vain hope they don't come in for crumbs. That is when they began invading the fridge.
Modiji gets mad at black money hoarders, I get mad at these night raiders.
They exasperate me.
I stopped inviting guests and if they do pop into my kitchen suddenly, I learned to use ingenious ways to hide them from their view. So a pan " accidentally" slips from my hand, the gas burner suddenly gets shifted and so on.
I tried everything..
So finally am trying prayer!
Posted by Unknown at 10:08 1 comment: 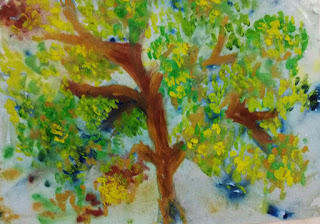 They fascinate me. I paint them on canvas or complete them in charcoal.

The branches look so seductive. The shades of brown, light and deep brown...
Leaves in light and yellow greens dance merrily displaying ample sunshine.
Flowers in huge bunches..in yellows and whites and deep reds, tempting my fingers no end.

There's one  lunging at me near my balcony. A mango tree. Delicious raw green mangoes hanging in clusters make my mouth water. Time to make some of those
pickles,  panna laced with chat masala or even that fabulous, gooey murabba.

Summer's in full swing. A variety of small, big, coloured birds sing. Perched high on the topmost branch, perfectly balanced, they sing a sombre, summer song. One bird goes 'ahhh...ahhhhhh' in the afternoons. As if in real, real pain. Crows do a caw caw endlessly. A gun shot somewhere..and cawcawcaws multiply a thousand times.

The tree is embroiled in deep mystery. How does it survive with no water? How does it remain strong unswayed by stormy winds? Does it really cry when it's cut away..sap oozing out?

Trees embody strength and courage in terrible adversity.
They mystify me..
captivate me..
motivate me..
and elevate me.
Posted by Unknown at 21:53 No comments:


Yeah. I call her that. She was a sweet( mishti..in Bengali) woman who lived in our building years ago. A working woman, she had two sons and an elderly woman to look after the younger one. The two women looked poles apart. The one, calm and dignified..the other real uncouth, hair in a mess and spoke funny Hindi.

What I found amazing about the mishti woman, was that she always smiled. That super sweet mesmerising smile that could floor anyone. She sang at functions in her melodious voice accompanied by her harmonium. She was always in a sari and sleeveless blouse.

If you looked closely at her, you would notice that she was almost bald.. She had literally no hair..except thinning hair going down the sides of her head. Perhaps she suffered from thyroid. She never spoke of it. She wore no wig, didn't crib..never weaved any hair back.
Serene and secure, she focused instead on her strengths.
Her smile. Her voice. Her accomplishments.

She left our place long ago..but her smile remains with me.
The strong, mishti woman..
Posted by Unknown at 19:31 2 comments: 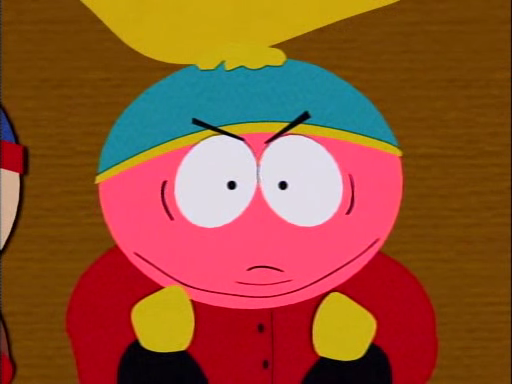 We were about to leave this guest house in Coimbatore after breakfast one morning, years ago, on our way to our son's new college where he had taken admission, when my hubby's colleague suddenly appeared on the scene.
He looked at our sons..then at me.( I was dressed in a red top and trousers, with short hair to match).
" Your daughter?" he asked hubby.
" My wife", declared hubby, with a glint in his eye.
The colleague went red like a beetroot, excused himself..and fled.
I don't know about my husband..
but he surely had made my day!
Posted by Unknown at 09:33 No comments:

I was heavily into fb those days, trying to reconnect with my old classmates, just after a long awaited reunion. When one day, this lone, red friend request button signaled my immediate attention.
Clicking on it, I found a very good looking young man vying to be my friend.
At least I thought so.
He looked sideways in the picture, with a half smile that lit up his chiseled features.
I accepted without hesitation. Going through his profile, I found him to be a popular guy. He had lots of friends.
Wow. Nice to have a friend like him.
He had an attractive personality.
I feel quite drawn to him.
One day finding him online, I decided albeit warily to have a little chat. I learned he was an ayurvedic doctor based in Kerala. At least something in common with him, I thought, being a mallu myself.
He seemed friendly..why else would he talk to a complete stranger like me.  He talked about his work. He must be ever surrounded with female patients, I thought.
In answer to his query where I was put up, I replied, "Well,quite close to movie stars, you know."
His ears perked up, now he was curious. "How far, where do they live?"
I quickly changed the topic. I really wasn't into filmi stuff then.
Suddenly he logged off, without even a bye.
How arrogant!
We had no interaction since then.
To add insult to injury, one day he unfriended me.
It wasn't a good feeling, though I quickly got over it.
Months passed. One day chancing upon his name on a friend's post, I got back to his profile. Only to see a dark young man in the picture instead of the friend I had got to like.
A thought flashed through my mind. Checking out the net, I found my old friend back!
But he was a celebrity. I didn't know that. An upcoming malayalee actor then,now is a famous guy down south.
Prithviraj!
How embarrassing!
I turned red as a beetroot. All this while I had been friends with a man who posed as an actor.
I laughed and laughed.
I'm now a movie buff.
Heavily into his movies.
Prithviraj's.
Posted by Unknown at 08:15 No comments: He's humble
he's simple
Clad in shirt n pant
Doesn't shout or rant
My doorbell he rings
'Bread!' he sings
If I say 'no'
unhappiness won't show
He'll wait n wait
Even though I'm late
He's never rude
Whatever my mood
For 500 he has change
Somehow will arrange
Come rain or sun
He'll bring in the bun
He's always smiling
My bread wallah inspiring.

They studied with us .
German.
They paid no fees..simply sauntered into class at will. We protested, teachers did too, but to no avail.
They just needed open doors. That's all.
Last year a dark guy used to attend class. He would rush in like wind, find the spot closest to the teacher and snooze away to oblivion. He never answered a single question.
But he knew all...(having attended these lectures umpteen times in the past).
We hated him..some feared for their lives. Sometimes Ma'am couldn't concentrate. So somebody would rise up with biscuits in hand and bribe the shabby fellow out through the same door he came in.
He has numerous cousins, mostly students. When I did my first year, a very fair but extremely unwashed fellow, a consistent latecomer would dash in, curl into a sleeping position and sleep throughout. The instant Ma'am finished, he would run out at top speed.
These guys are well qualified. They start from basic level.. some go on to complete their Phds.
As a rule, they need not give exams.
But an ambitious guy appeared in our class this year to write his finals. Obviously people next to him couldn't concentrate. He wouldn't understand " GO."
Finally a girl summoned up enough courage and went to the front of the class..
"You..you..you..you"..she whispered beseechingly, desperately to the fellow. Loud enough for us to hear.
He slowly rose up, ran down the steps..and simply stood in front of her..and stared.
He stared..and stared.
We paused holding our breath. We stared.
Finally this crazy dog decided to call it a day.
He fled.